Subscribe to the NewscastStudio newsletter to get the latest in broadcast design and engineering delivered to your inbox.

Both NBC and MSNBC shared a combination of augmented reality, virtual reality and virtual set extensions that used a dramatically lit nighttime model of the Capitol and its grounds to showcase election results. 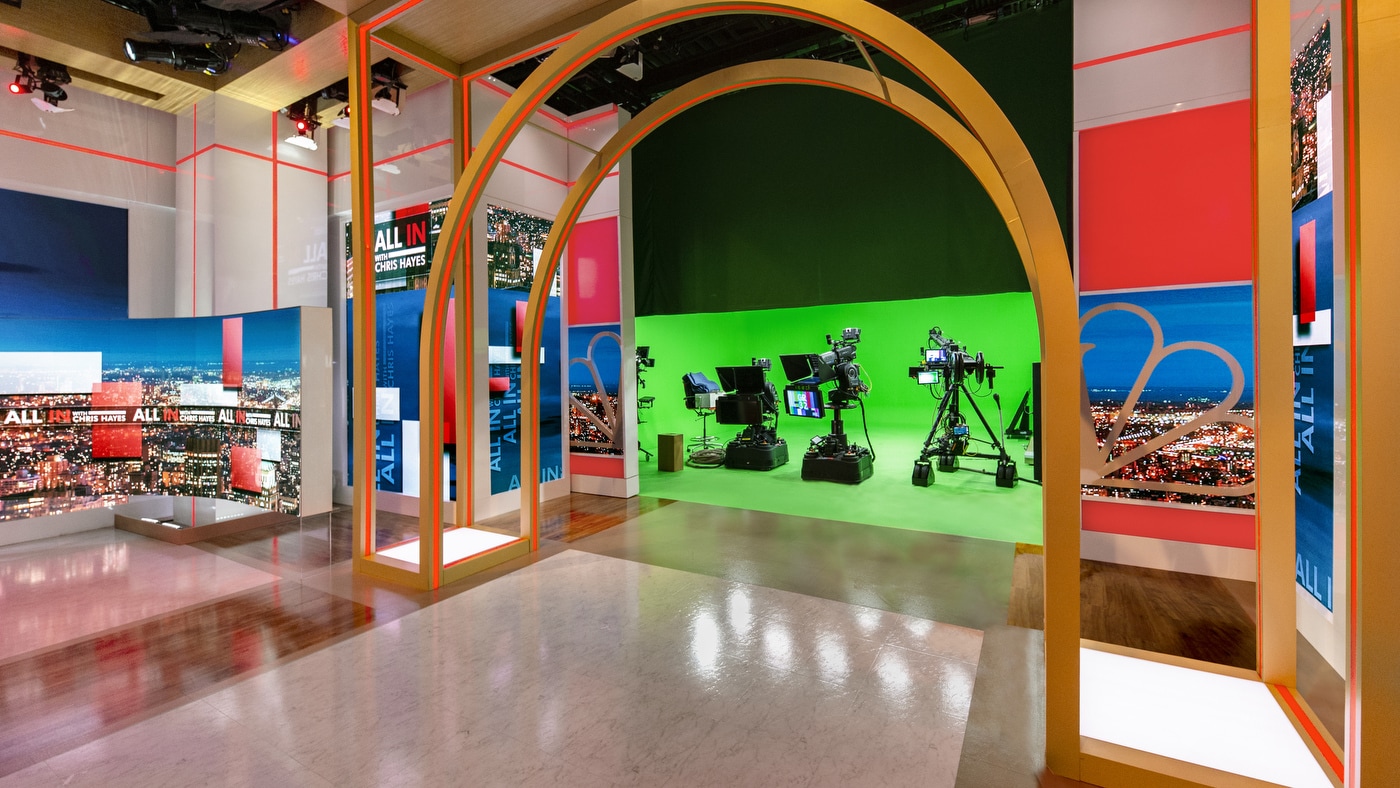 A view of the green screen studio space behind the sliding walls, which are the segments with half of the NBC peacock logo on each.

MSNBC took advantage of green-screen studio space that is tucked away behind two rolling walls adjacent to its main studio, 3A.

As in 2021, space was used to transport viewers into a virtual space – but also took things a step further this time around. 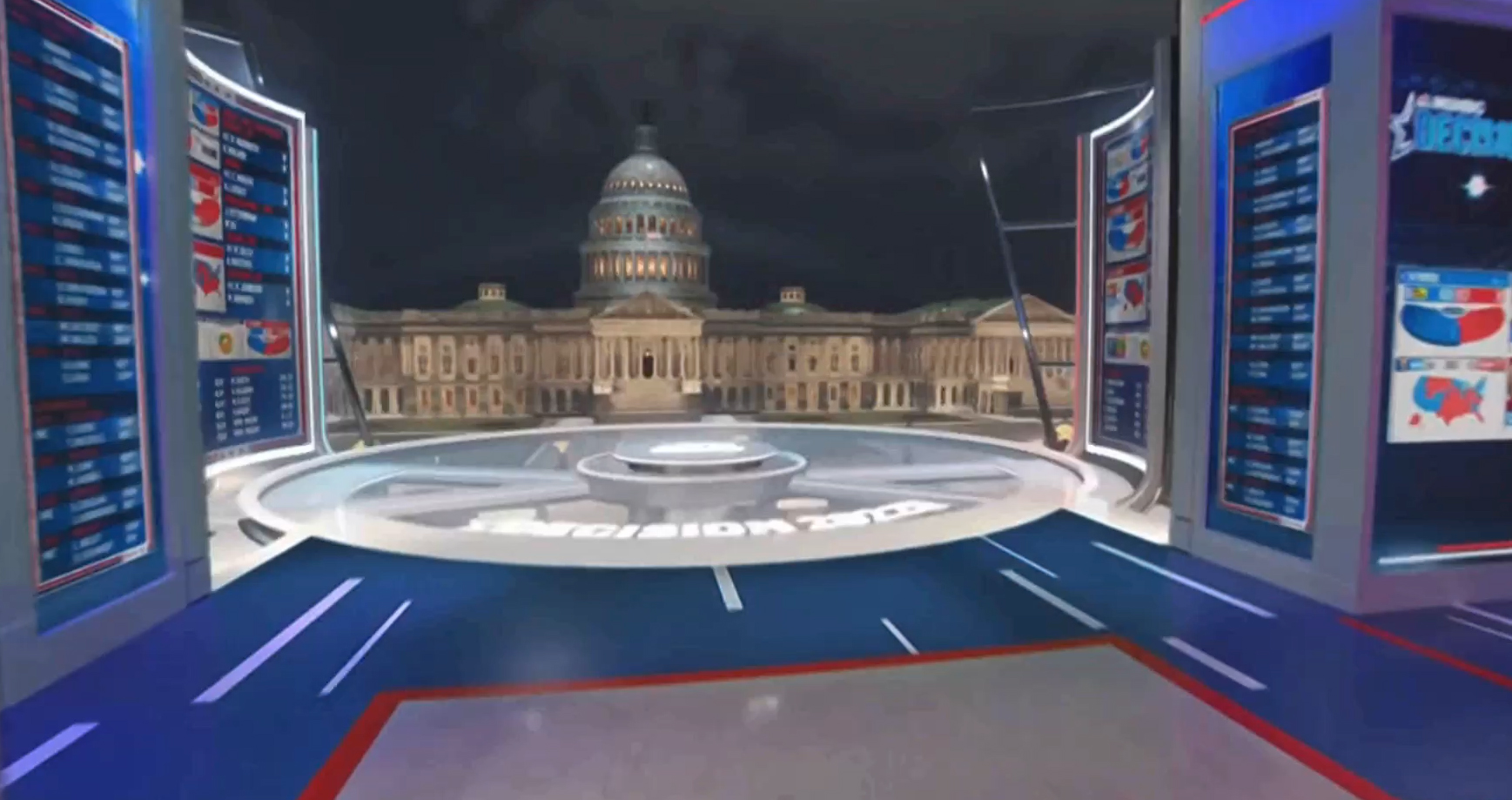 There was a small virtual structural area closest to the open doors, which was designed by Clickspring Design, the same company that designed the studio itself.

This included a circular balcony with a glass floor and an NBC peacock in the middle, as well as two angled metal metal frames supporting large simulated LED boards with election data.

The balcony remained visible even when the environment beyond was not in use, often appearing behind Steve Kornacki’s touchscreen space.

When the capabilities were fully utilized, however, the view quickly flew across the railless balcony to a 3D model of the Capitol grounds, which was developed by NBC’s internal team.

Instead of the relatively small atrium-like space used in 2021, viewers saw virtual views of Washington that were greatly simplified to prominently show only key structures – including the Capitol, Lincoln Memorial and Capitol Reflecting Pool as well as the park-like settings that surround the area (the Capitol Reflecting Pool is distinct from the larger one farther west).

The window traveled between these locations, flying rapidly over grass, buildings, and roads.

There were several key layouts used, most of them centered around the Capitol, which is appropriate given that the heart of the national races was about the lawmakers who work there. 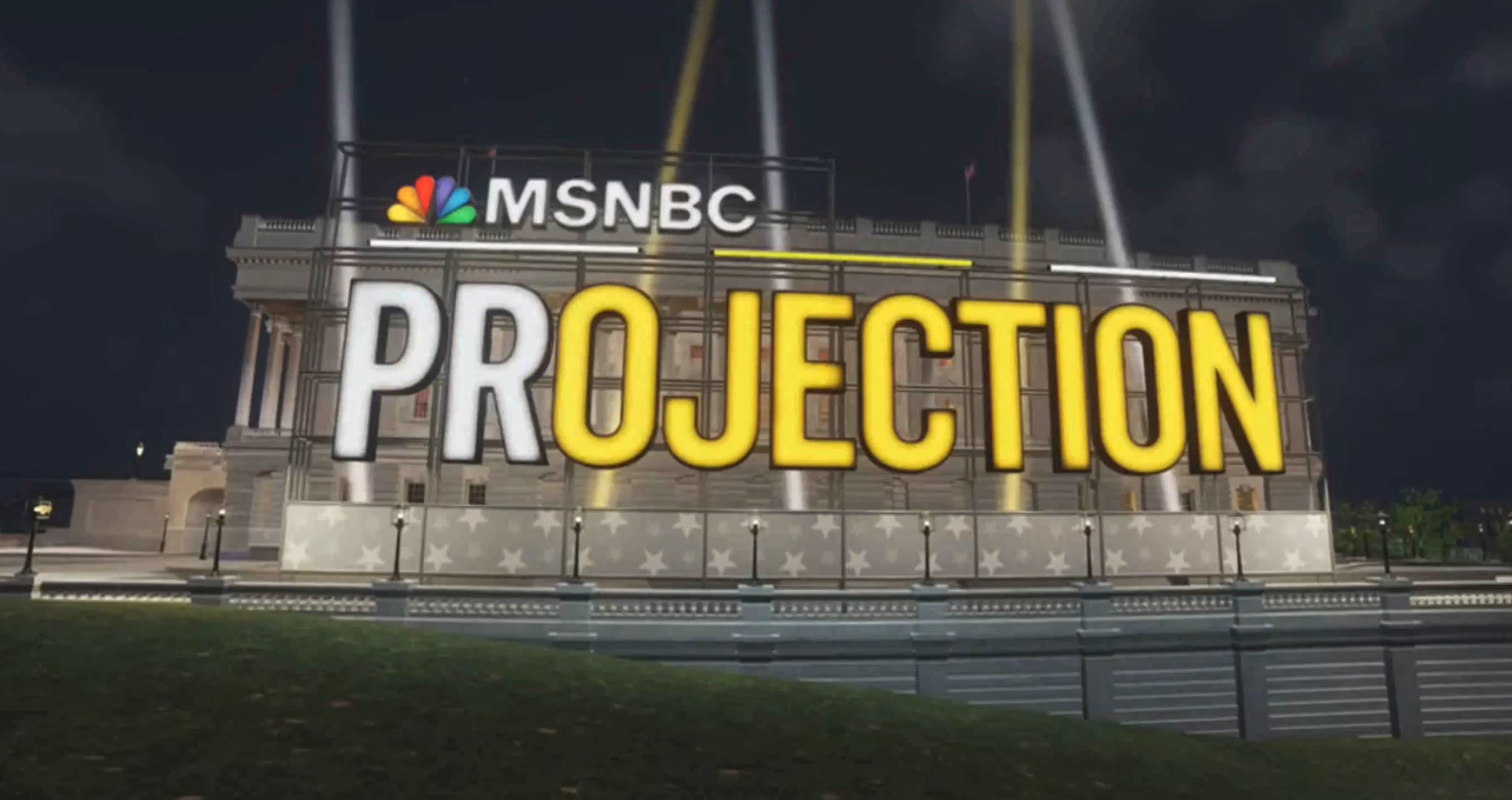 The first option was on the side of the building pictured with a virtual scaffold-like structure on the back apparently supporting a lighted version of the network’s logo and the word “Projection”. 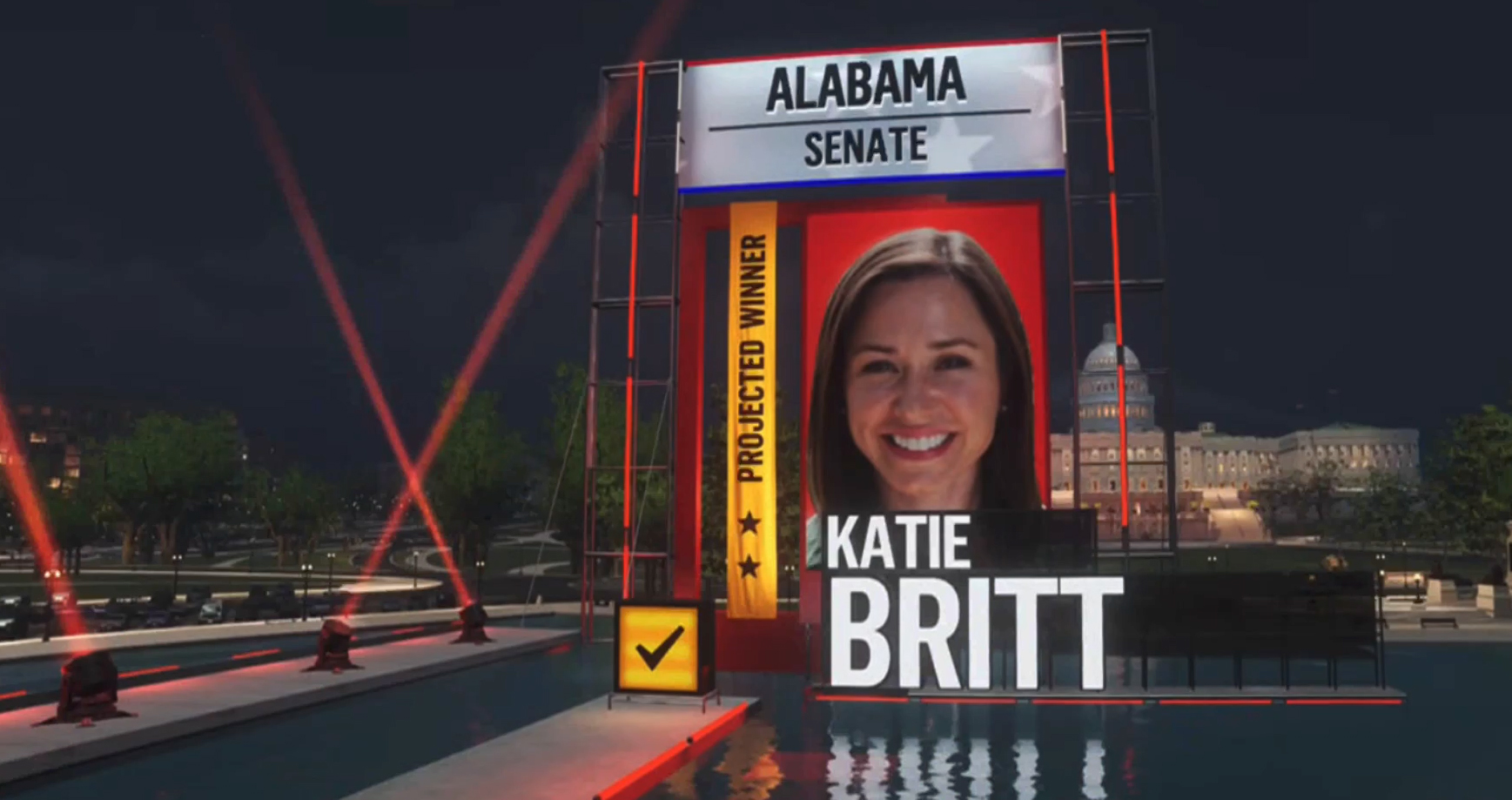 Another common scene was geared more towards the reflecting pool and favored when only one contestant needed to be shown, usually to feature a projected winner.

These were displayed in another scaffold-like structure with accent lighting and large sign-like elements to show condition, race type, status (such as projected winner) and portrait of the person. Below, a smaller support structure served as a background for the first name and surname, the latter being shown larger than the first name.

In case of projected winners, an additional box, sitting on a sidewalk peninsula. The stage could be lit with red accent lighting for Republicans and blue for Democrats, an effect that was also applied to the spotlights shown on the left as well as the sold support frame around the portrait. 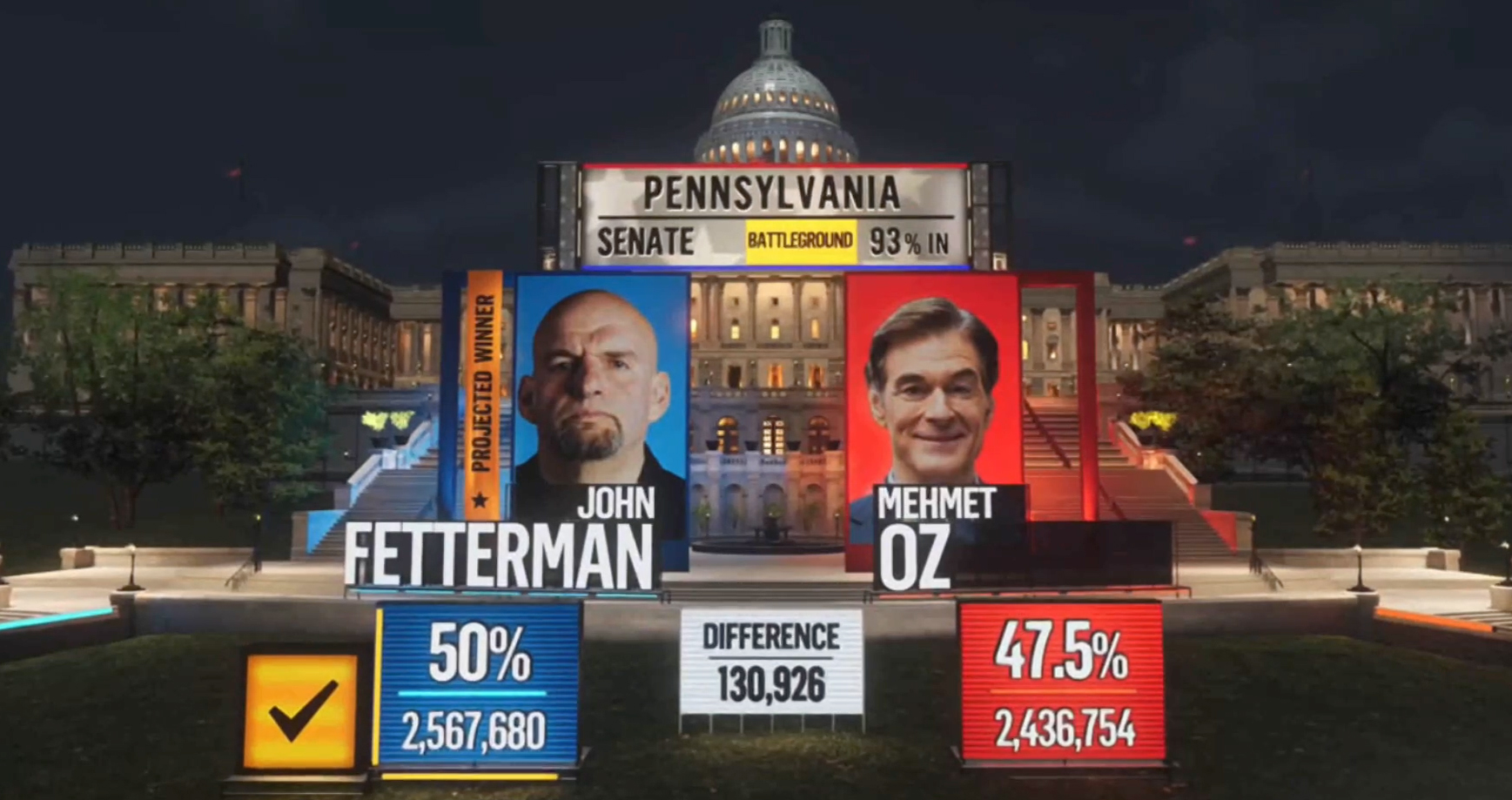 When two contestants needed to be shown – whether to illustrate the match or show a winner or the current state of the race, the screen moved to a closer view of the Capitol, with two frames set up below a taller held banner in the air by simulated scaffolding.

Depending on the app, additional, smaller freestanding signs could be inserted into the grass in front, showing current vote totals, a yellow check mark for projected winners, or other data such as the vote difference.

Another location was a grassy area further west of the Capitol’s reflecting pool where balance of power charts could be displayed for both the Senate and House. 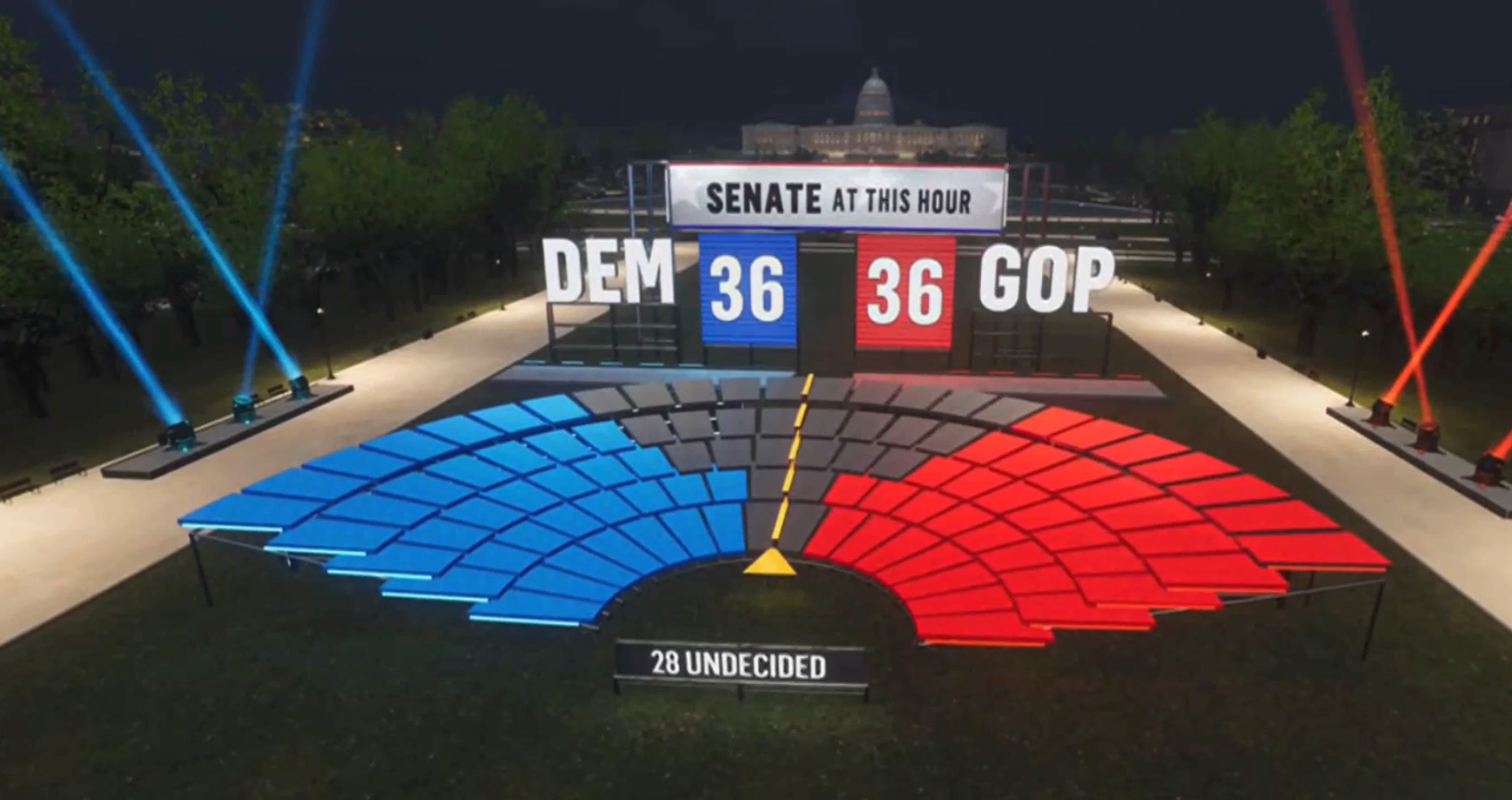 The Senate layout used what looked a bit like a curved set of risers or bleachers set into the lawn, with each seat represented by a flat corner. The metal structures behind this supported the “Dem” and “GOP” labels as well as the current counts and charts label. Closer to the porthole, a small black panel indicated the number of undecided seats. 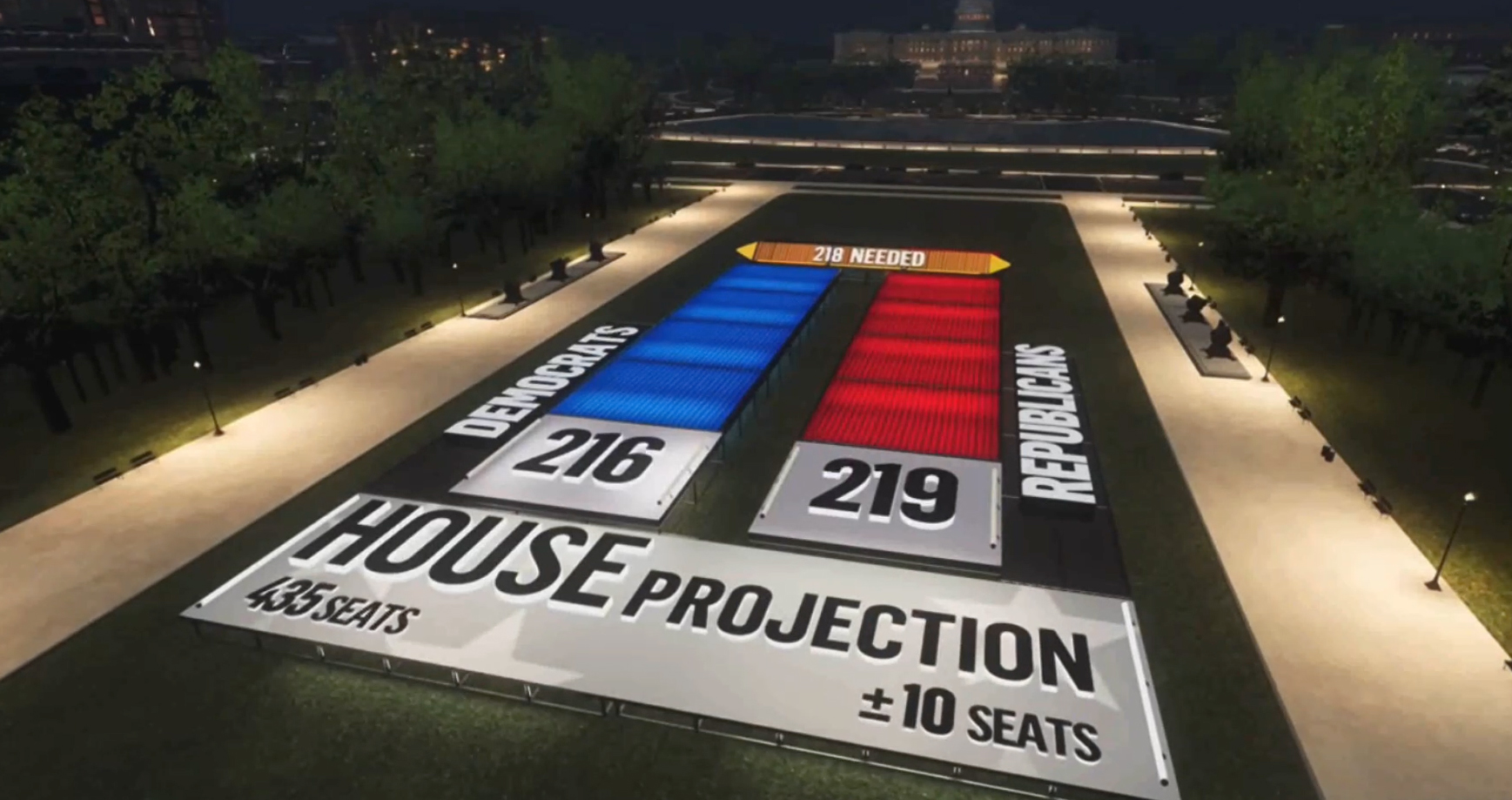 The same park space could also show US House projections, with platform-like structures with metal tops serving as a canvas for lettering explaining the graphic. Two catwalk-like elements sat further back, the virtual surfaces lighting up red or blue, depending on the side, as well as the current pointings to a solid part near the foreground.

For much of the night, the numbers were so close that attempting to illustrate the bar chart was quite ineffective, as both tracks were essentially filled with a similar amount.

All of these views included built-in floating camera movements and wandering style movements that caused a subtle shift in perspective of the different layers of 3D panels.

The NBC broadcast network also had access to the same set of graphics. 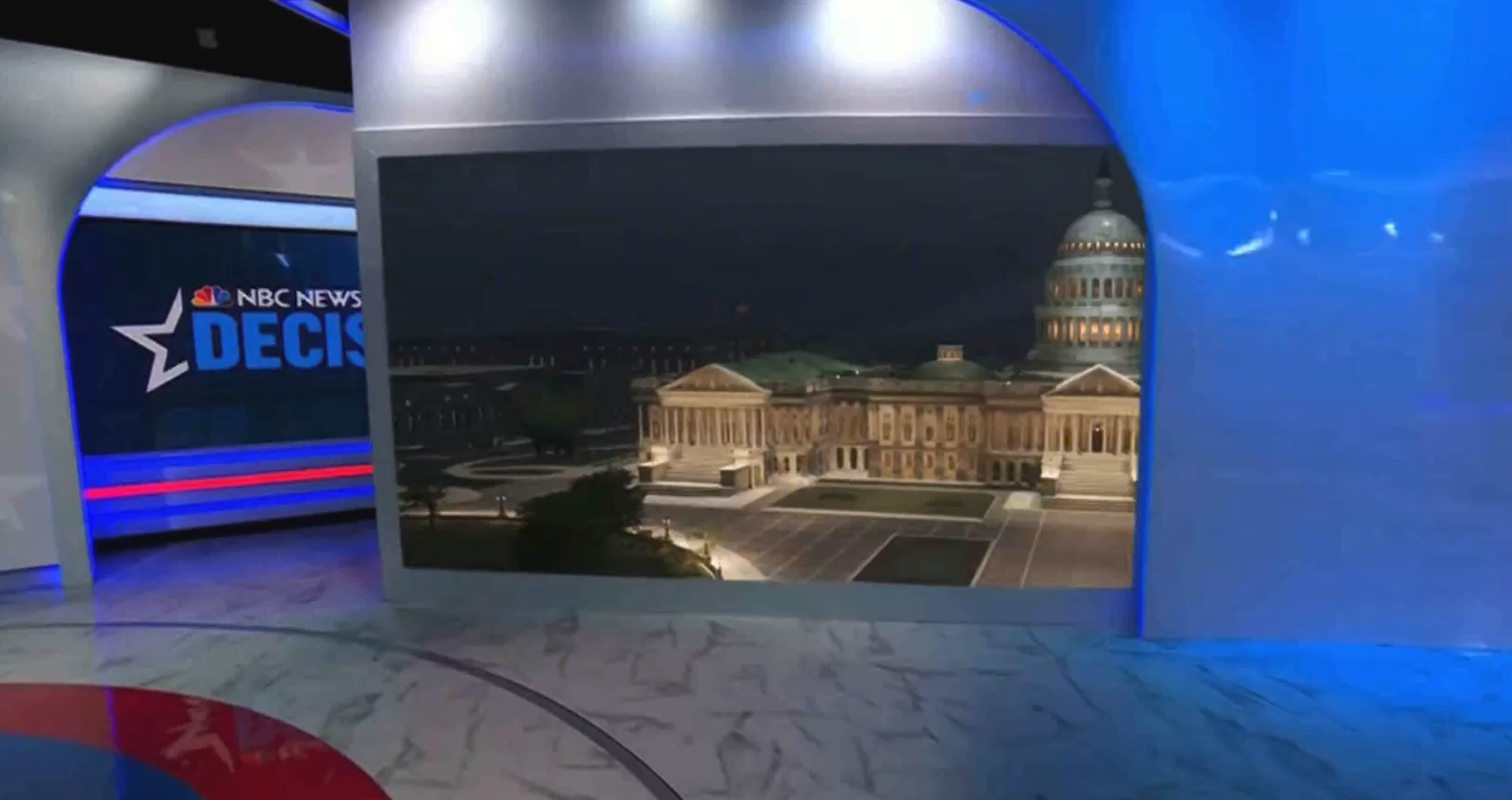 A handheld camera view that had just shown the main anchor office but quickly moved to the southeast video wall, which served as a portal to the Capitol Hill virtual rendition.

During its coverage, the flat video wall in the southeast corner of Studio 1A could become a window into the virtual stage which was used in combination with a parallax effect. 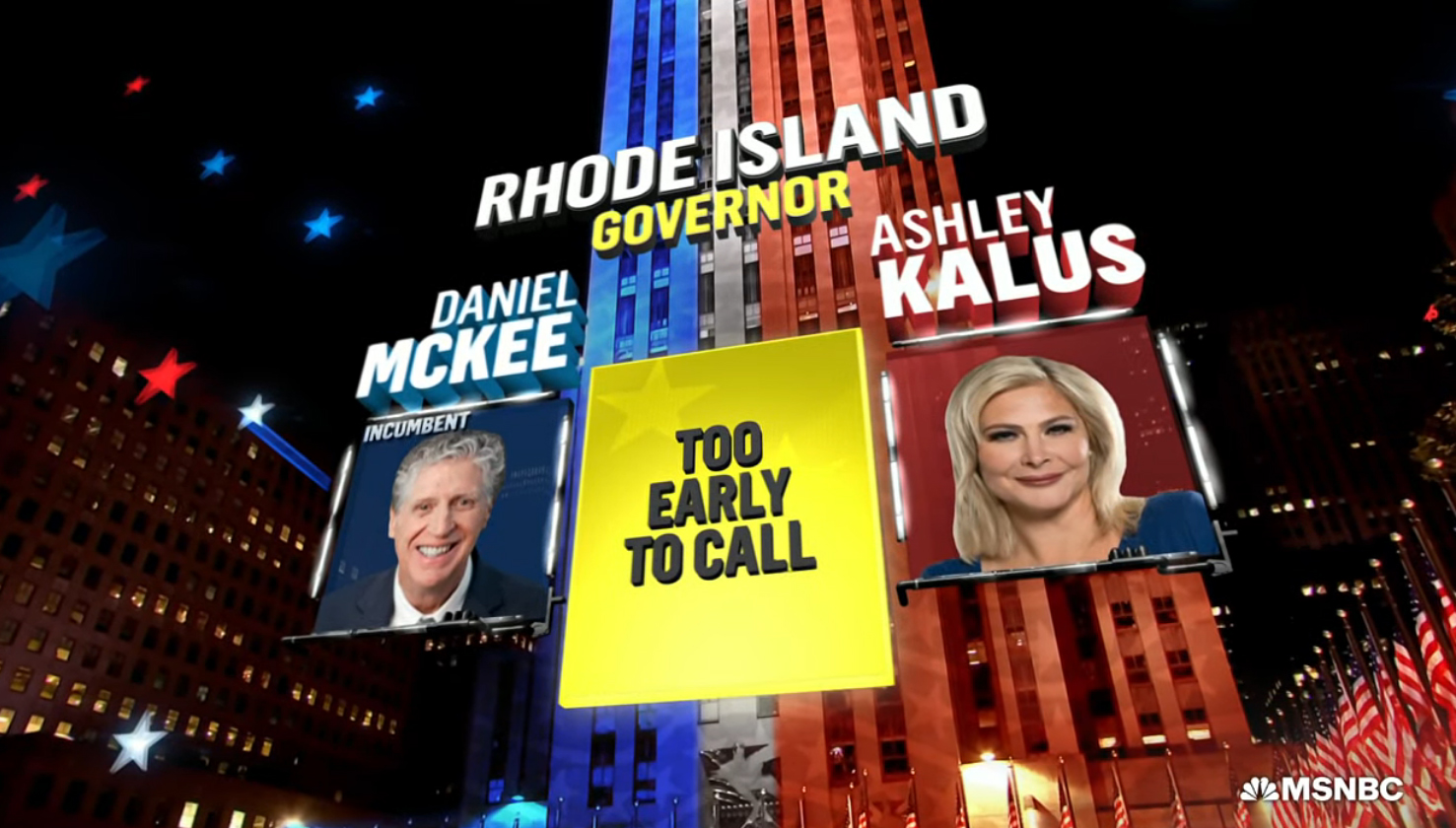 For non-congressional races, a view of the exterior of 30 Rockefeller Plaza with floating signs in front of the skyscraper could be used. This was previously how NBC and MSNBC displayed most results using AR.

Both networks also had the ability to cut directly to the outside AR or virtual environment without the transition element if needed. Additionally, more traditional full-screen graphs showing results were also available and appeared to be in use later that night.

The AR star and other accents have also been added to these scenes, as they have in the past.