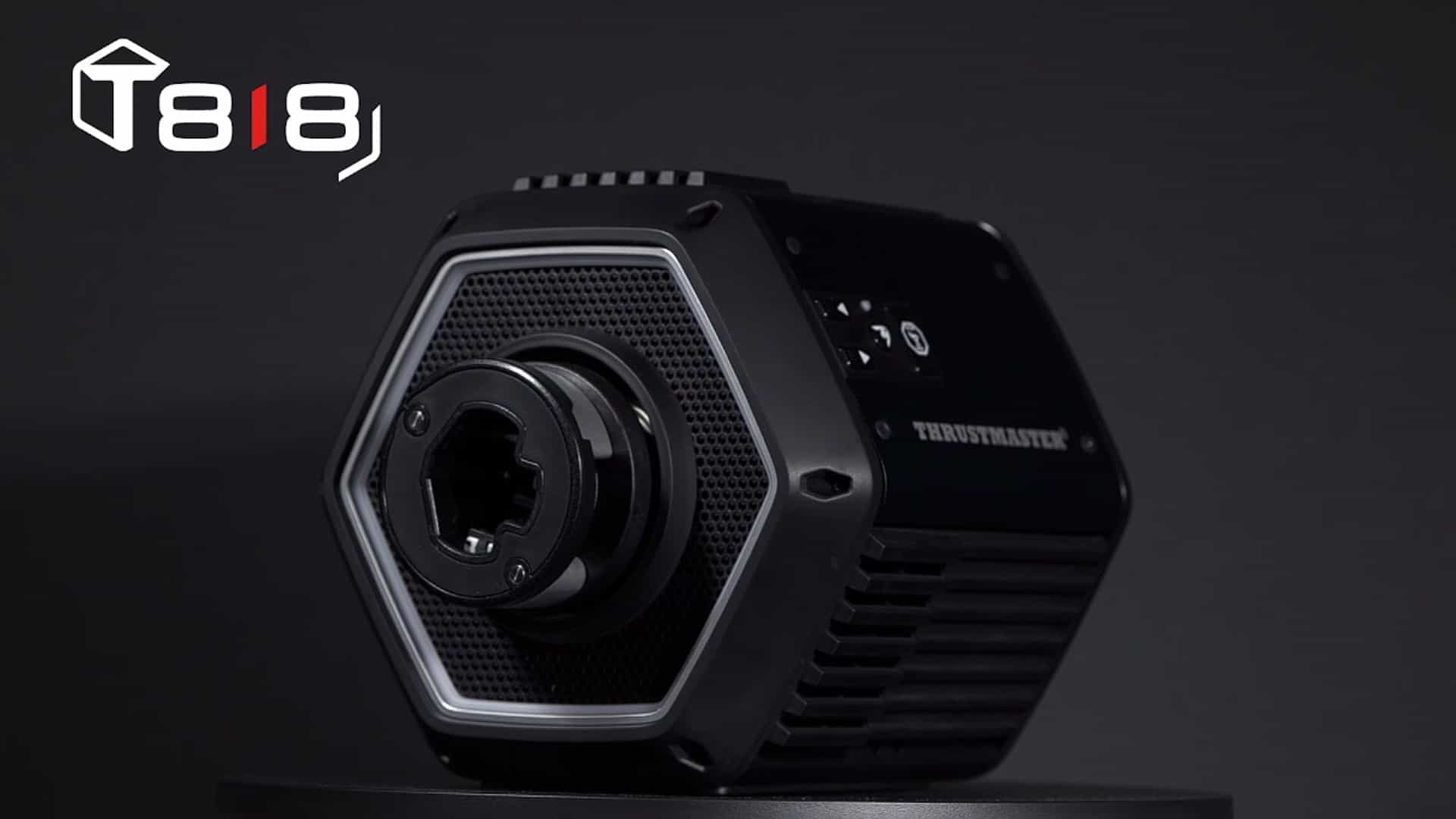 By Thomas Harrison-Lord and Justin Melillo

Thrustmaster is officially in the Direct Drive game after unveiling the T818 Direct Drive Wheelbase Thursday, Nov. 17 during a live stream on Twitch.

A hexagon-shaped base with the LED lighting that’s been teased for nearly a year is on display on the front, and the good news is that for some buyers, they might get it in time for Christmas.

FEATURES OF THE THRUSTMASTER T818

The Thrustmaster T818 direct-drive wheelbase comes with a built-in 10Nm constant torque force. One area that was highly noted is that this particular system has no kind of filter, giving users an unfiltered experience in their hands.

The internal motor inside the system, as well as the entire base were produced in France.

On the base itself, there are buttons for calibrating settings to the base, as well as an instant force feedback off button on the side, just in case.

The front of the T818 features a changeable LED strip. By default, you will be able to browse the available colors and also adjust its intensity.

In the future, however, Thrustmaster hopes that game developers will program it to support engine revs or marshal flags – something we predicted back in March.

This is similar in philosophy to the telemetry display on the company’s Formula Wheel Add-On Ferrari SF1000 Edition, where it was up to the game creators to support the feature.

The exterior of the T818 wheelbases will feature two removable metal plates. Out of the box these will be dark blue in color.

But, optional additional color plates will be available for €29.99. Five different shades will make up the initial line-up.

The T818 is the first Thrustmaster system to include the new Next Gen Quick Release. Using an adapter, all previous Thrustmaster rims can be compatible with the new system.

A wheel rim swap can be performed in less than five seconds, where the latch built into the base is lifted, the wheels easily remove and snap into place, then the latch is easily closed.

“We work hard to make sure you get the best feedback without breaking your existing wheel, so we really tested everything. We made sure everything you use works at 10Nm of force.

If you are already in the Thrustmaster ecosystem and have an existing rim, luckily an adapter is included in the Thurstmaster T818 box.

Four new rims are also on the way, but we don’t know what they are yet. These will feature a native version of the new quick release, so a second quick release adapter will also be available for compatibility with older Thrustmaster wheelbases.

The Thrustmaster T818 will be a PC-only device. However, there is a plan for consoles down the line.

“Don’t worry, we also have a plan for the console,” said Xavier Pieuchot, Product Marketing Manager at Thrustmaster.

For previous Thrustmaster rims and equipment, the T818 is backwards compatible with the appropriate adapters. Thrustmaster also said the wheel will have future compatibility.

WHAT PORTS ARE INCLUDED?

Good question! There’s a USB C port to connect to a computer for future firmware updates, a hub for existing Thrustmaster pedals, and a brand new RJ45 port for future unannounced peripherals.

HOW MUCH DOES THE THRUSTMASTER T818 COST?

The base model of the Thrustmaster T818 will include the wheelbase, metallic blue plates, 1 quick release adapter and the appropriate UK, US or EU plugs depending on the region in the box.

It should be noted that the price excludes a steering wheel or pedals.

WHEN IS THE THRUSTMASTER T818 AVAILABLE?

Pre-orders for European customers are live today, November 17, 2022. This first wave has limited production and will ship before Christmas 2022.

A second European wave of pre-orders will take place on December 26 for delivery in January 2023.

US customers should wait until March 2023 and availability for other regions is TBD.

A special Ferrari edition with the existing SF100 formula-style wheel is also on the way, but pricing and availability have yet to be announced.