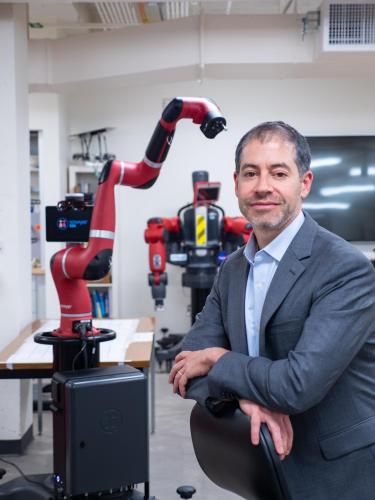 Harry Surden, professor of law and director of the Silicon Flatirons Center Artificial Intelligence Initiative, delivered the 47th Annual Austin W. Scott, Jr. Lecture at the University of Colorado School of Law on November 10. The conference was titled “Artificial Intelligence and Law”. . The Scott Lecture is presented annually by a faculty member engaged in a significant scholarly project who is selected by the Dean.

Professor Surden devoted a good part of the lecture to explaining in broad strokes how AI really works, what it is and what it is not. His remarks emphasized that to understand the intersection of AI and law, we must seek to understand the technology in its own right. Surden explored the limits of AI as it exists today and how it differs from how popular culture often portrays it.

Ultimately, AI is neither inherently good nor bad for the law, Professor Surden explained. It offers the potential for a fairer legal system or, if used inappropriately, a less fair and more bias-prone system.

Harry Surden is a professor of law at the University of Colorado School of Law. He joined the faculty in 2008. His scholarship focuses on artificial intelligence and law, legal informatics and legal automation (including machine learning and law), self-driving cars and law, intellectual property law with particular emphasis on patents and copyright, confidentiality of information. law and the application of computer technology within the legal system.

Prior to joining CU, Professor Surden was a Resident Scholar at the Stanford Center for Legal Informatics (CodeX) at Stanford Law School. In this capacity, Professor Surden conducted interdisciplinary research with collaborators at the Stanford School of Engineering exploring the application of computer technology to improving the legal system. He was also a member of the Stanford Intellectual Property Litigation Clearinghouse and director of the Computer Science and Law Initiative.

Professor Surden served as law clerk to the Honorable Martin J. Jenkins of the United States District Court for the Northern District of California in San Francisco. He received his law degree from Stanford Law School with honors and received the Stanford Law Intellectual Property Writing Award.

Prior to law school, Professor Surden worked as a software engineer for Cisco Systems and Bloomberg Finance LP. He received his undergraduate degree with honors from Cornell University.

Professor Surden is an Affiliate Faculty Member of the Stanford Center for Legal Informatics (CodeX).

The Austin W. Scott Jr. Lecture is named after Austin Scott, a member of the law school for 20 years. He was a beloved teacher as well as a prolific writer, whose scholarly works were in the areas of criminal law and criminal procedure. In 1973, former Colorado Dean of Law Don W. Sears established the Lecture Series in his memory. Each year, the Dean of the Faculty of Law selects a member of the faculty engaged in an important scientific project to give a lecture on his research. Learn more about the Austin W. Scott Jr. Conference.